The Grupo Folclórico da Casa do Povo da Camacha was founded on November 1st 1948 with the aim of representing Madeira and Portugal at the Madrid’s Popular Dances International Contest, in Spain, where it achieved the 2nd place on the modality of Mixed Dances.
It had Carlos Santos as its first artistic director who recollected songs, dances and costumes from all over Madeira, contributing greatly to the preservation of Madeira’s popular traditions.
Being the oldest Folklore Group in the Autonomous Region of Madeira, It has already represented Madeira island all over Portugal, across Europe, in Northern and Southern America, Africa, Asia and Oceania.
The songs, dances and costumes presented by the group date back to the 19th century and beginning of the 20th century. Although, they evoke reminiscences that go back since the time of the island colonization in 15th century.
The Group was distinguished and recognized for its work in defense of the popular culture by the Regional Government of Madeira, by the Tourism Regional Secretariat, and by the City Hall of Santa Cruz.

The first references to the Madeira Archipelago date back from the beginning of the 15th century when the Portuguese reached these unpopulated islands. Being the number of Portuguese settlers insufficient, some Moorish, Africans, Guanches and even Indians were brought into the Island. Afterwards, from abroad, also came Europeans, attracted by the sugar trade. A few centuries later, due to the wine trade, several British families also settled in Madeira. Costumes, music and dances kept by Madeira’s people throughout the time are typically full of movement, rhythm and colour. On the other hand, we also find a characteristic monotony and repetition in the melodies and in the dance movements. All this features are nothing but a reminiscence of the complex variety of uses and cultures that populated this cosmopolitan Island along with the Portuguese domination. In Madeira’s costumes, the progressive additions and adaptations to the clime, labour needs, available resources and fashions lead to the most none and typical costume from around 19th century with the typical hat called “carapuça”. The progressive passage from the monochromic to the colourful garments mostly notable in the striped skirts may be the best image of the specificity of our folklore. As this Group was founded with the aim of representing Madeira and its traditions, the costume chosen by the ethnographer Carlos Maria dos Santos, artistic director, was that generalized through parishes around the Island in the eighteenth and early nineteenth centuries, with the striped skirts and the “carapuça”. 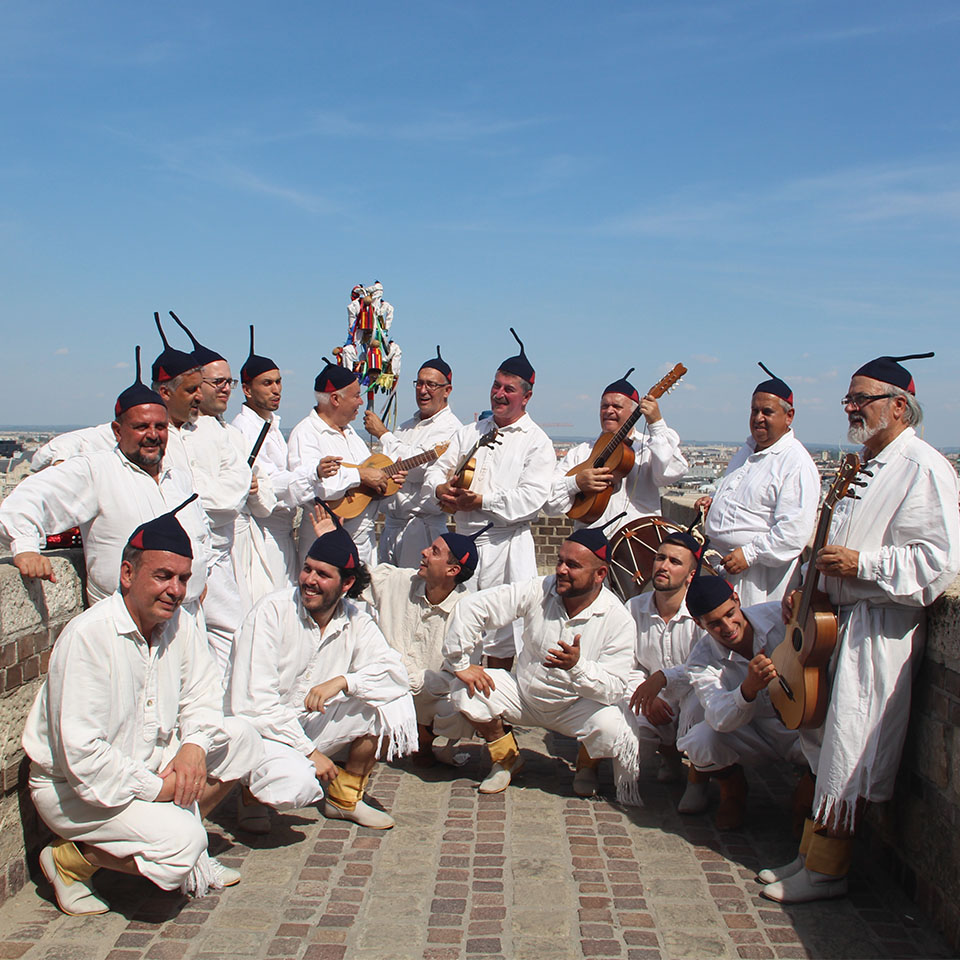 The white linen peasant costume consists of white earthen linen shirt and shorts. At the waist is used a strip also made of white linen. In the head is used the blue fabric hat called "carapuça", the footwear is the "bota chã" the typical boots made of genuine leather. 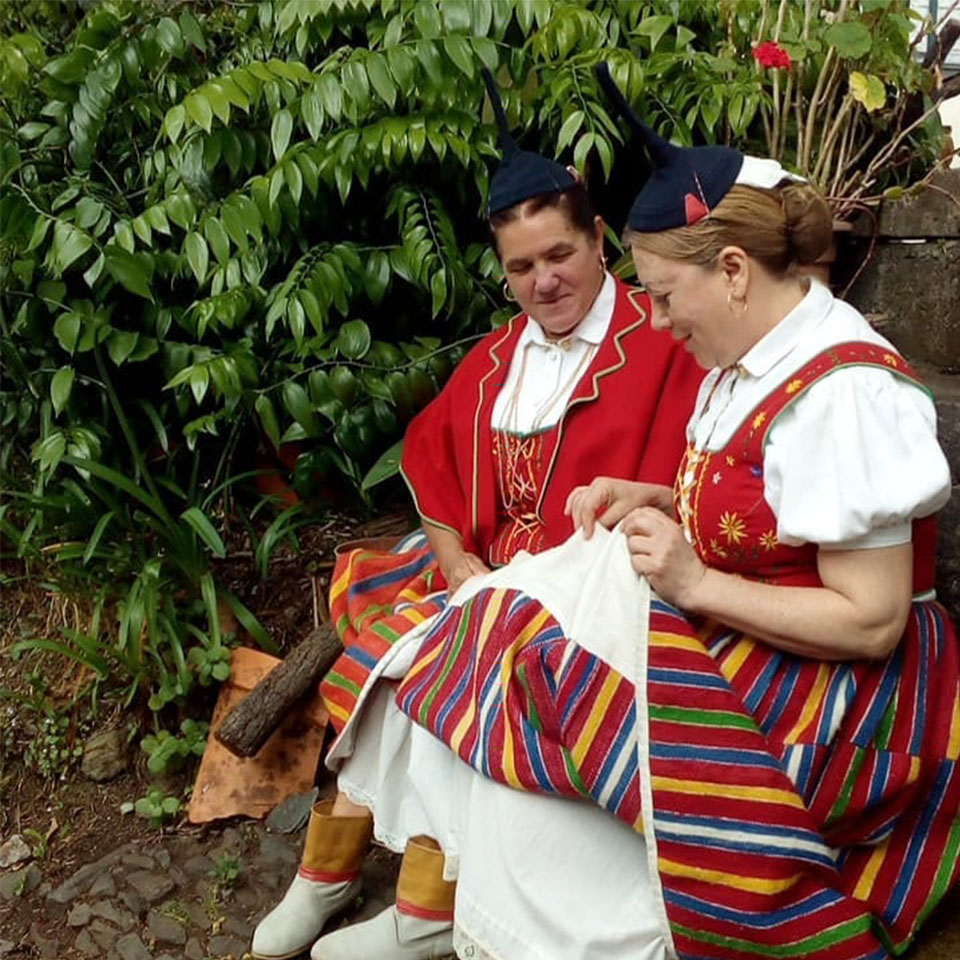 Composed of white linen blouse and red corset embroidered with floral motifs. The colorful skirt, is hand-woven on a loom, it has a red background and colorful vertical stripes. The cape, the blue cap called "carapuça" and the boot complement the clothing set. 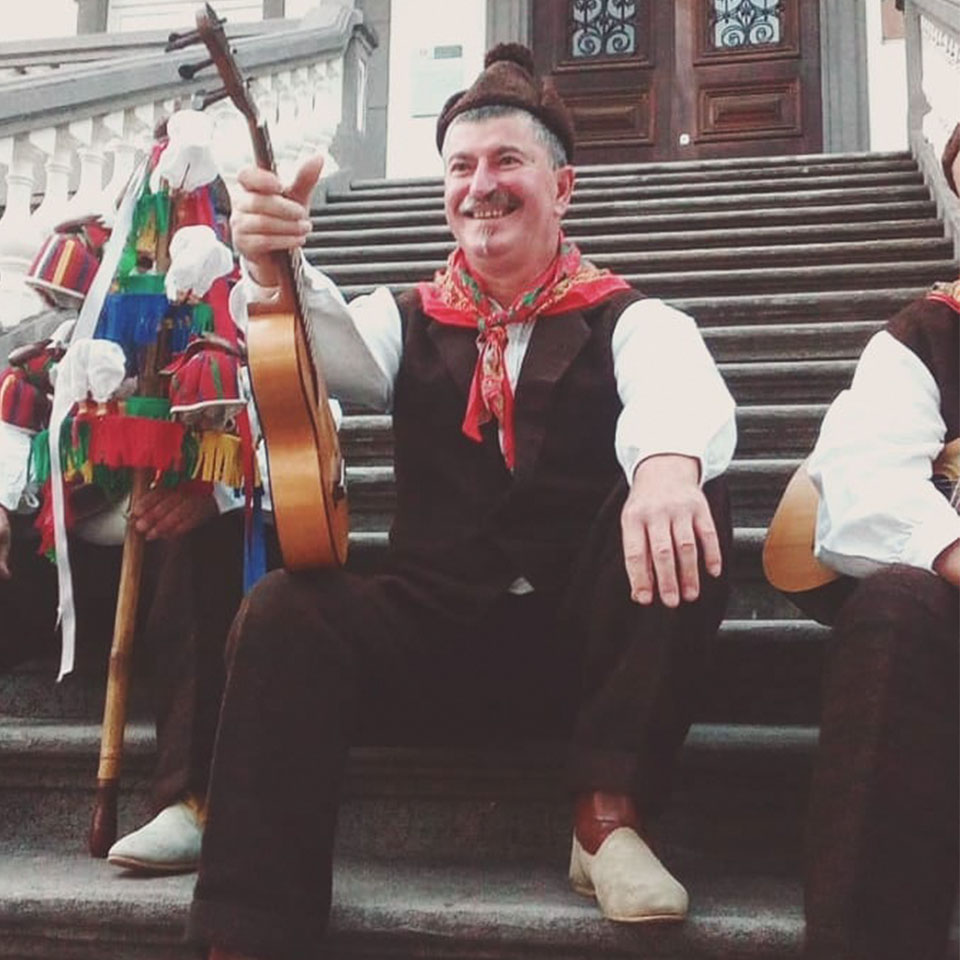 It consists of trousers and a jacket made of "serguilha", which is a fabric obtained from sheep's wool and a blend of linen hand-woven on a loom. The shirt is white linen. In the head, a wool cap. It is used with the "bota chã" typical boots made of genuine leather. 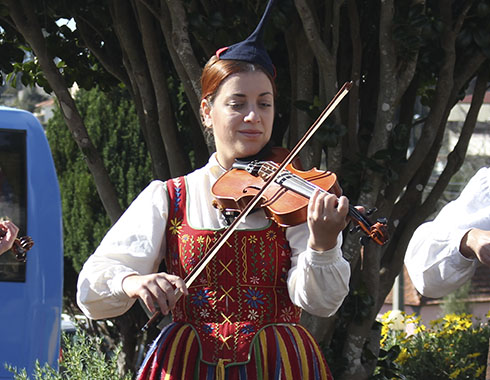 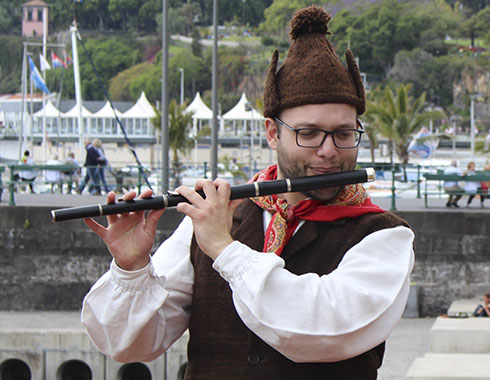 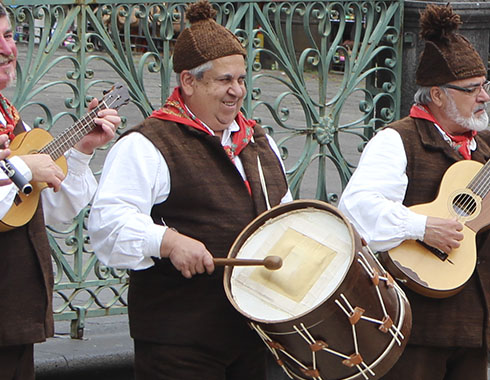 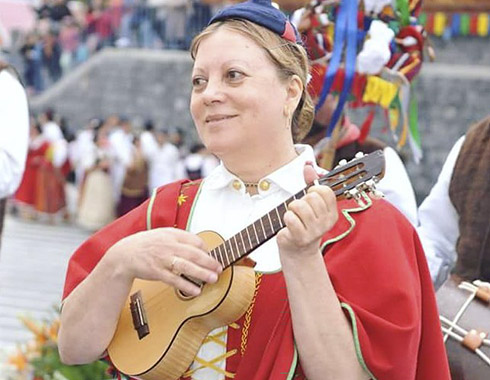 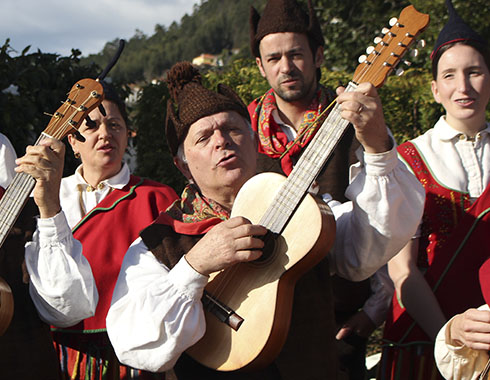